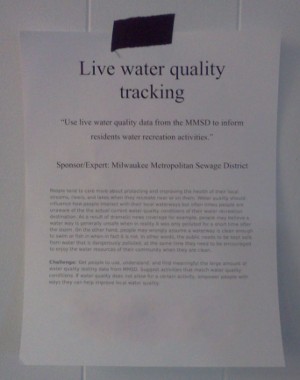 A friend invited me to Random Hacks of Kindness in Milwaukee. I haven't been to Milwaukee or a hackathon in sometime, so I was excited to visit the city and meet other developers.

I met my friend downtown at 6:30am, but since I was so preoccupied the night before with submitting my Apps for Metro Chicago, IL entry before the midnight deadline, I overlooked the fact that I had to buy a travel ticket in advance. I managed to get a ticket at the last-minute and was on my way with about 5 hours of sleep under my belt. Half way through the trip my friend asked me if I brought my ticket to the event. I didn't even register! I was clearly flying by the seat of my pants on this one. At least I had my trusty T61 laptop.

We arrive and everything looks familiar. We get to the Grand Avenue Mall an hour before things start and I start remembering the times I would walk through that mall on my way to the Badger Bus (it was a good way to avoid the cold for a few blocks). The event starts, I fill out an impromptu name tag and everything goes great. I meet a lot of people and hear some talks on development cycles and mobile development. It was a fun way to start the day.

After the talks, the event continued at Bucketworks. I met up with my friends in the mall and we decided to walk from the Grand Avenue Mall to Bucketworks. It was cold, windy, and wet that day and, about half way, we realized that we didn't see anyone else walking behind or ahead of us. "There must have been a shuttle", "people probably drove", and "where is this place?" I mentioned. Luckily, the thought of free Jimmy Johns kept us going and we eventually arrived, looking a bit worn, to a group of people who clearly did not walk from the mall. "You don't build character in a shuttle" and "food tastes that much better after a journey like that" I quipped. Crazy Chicagoans.

After we settled in and dried off, the presentations began. I really enjoyed hearing people discuss the water problems they had. Any one of them was a possible candidate for hacking. I was overwhelmed by the amount of topics that were available to work on and I wasn't able to decide on just one. I decided to walk around and listen to more presentations. That brought me to the table of Jessie from Sweetwater Farms. He talked about aquaponics, a subject I have never heard of before, but was very interested in. There were two other developers there, one who knew PHP and the other was a Django/Python developer. With my Ruby on Rails/Ruby knowledge to the mix, we had all the web development programming language bases covered. Unfortunately, that prevented us from deciding on what to build the project in and no consensus was made about what or how to create the application. I wish I could have helped more, but ultimately, I wasn't a good fit for that team. I walked around to see what other teams were working on, and I heard a fantastic tutorial about the basics of beekeeping from the gentleman who makes Beepods. I never expected that I would learn so much about bees that day. 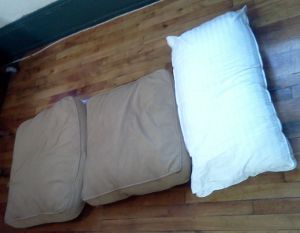 Later, I started working on data from the Milwaukee Metropolitan Sewerage District. I heard that they were doing live water quality tracking and I was interested in the data. I eventually created a ScraperWiki scraper from the data sources I found and the plan was to create a visualization using that data. I wanted to use D3, but I didn't have enough experience to build a visualization with it in such a short amount of time and on such little sleep. I saved the work and took a two-hour nap on the floor which was mostly me just closing my eyes while the commotion from the bar across the street kept me up (people were literally being carried down the street). After waking up, I continued to research D3, but wasn't able to create a visualization before the deadline. 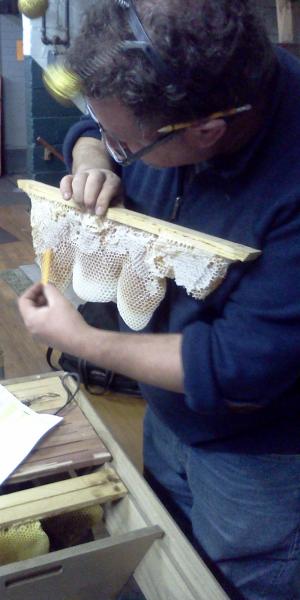 Since there were only a few options for travel coming home, we ended up taking an early bus which had us leave before the presentations. I wish we didn't have to miss the presentations, but it was the only way we could get back at a reasonable time for a reasonable amount of money. I slept on the bus the whole way back. After getting on the CTA, I had a great conversation with a fellow passenger and we talked all the way from the Quincy to the Diversey stop. In a bizarre coincidence, we eventually find out that they know someone that was at the hackathon. Small world.

After all of that, I definitely learned a few things for next time. Here is some advice for your next hackathon.

Overall, it was a fun weekend and I am glad I met everyone there. I look forward to my next hacking event and thank you to Bucketworks and all the sponsors for hosting us and putting on a great event.